OMEGA and ALINGHI celebrate their unique sailing partnership with the launch of an extraordinary new catamaran-inspired Speedmaster. Following their partnership formed in 2019, and as a special tribute to the ALINGHI boats that fly across the water, OMEGA has chosen the Speedmaster. This one-of-a-kind model displays some truly captivating details and is inspired by ALINGHI's unique boat design. The Speedmaster Dark Side of the Moon ALINGHI combines the most advanced watchmaking materials and craftsmanship. Most impressive is the watch's Calibre 1865, which can be seen through the skeletonised dial. The laser-ablated movement has been inspired by ALINGHI's TF35 catamaran, and combines a mix of honeycomb and black carbon patterns. The black ceramic timepiece is also notable for its tactical time display at 3 o'clock and the ALINGHI logo at 6 o'clock, which rotates when the chronograph function is used. Much like a winning performance on the water, the stunning new sailing watch is the result of exceptional teamwork. The release of the Speedmaster marks a proud moment for Raynald Aeschlimann, President and CEO of OMEGA and Ernesto Bertarelli, Founder and President of ALINGHI, as the stylish chronograph beautifully represents the brands' shared values: Swiss precision, innovation and pioneering spirit. As explained by Raynald Aeschlimann, "The new watch is about two great Swiss brands combining their passion for innovation and sailing. To match ALINGHI's state-of-the-art boat creation, we've harnessed some truly impressive technology, along with the best materials and a very original design concept." For the overall colour coding, OMEGA has matched the watch with the ALINGHI logo, which includes red to represent passion, and black for technology. This can be seen through features such as the perforated black and red rubber strap, as well as the 44.25 mm case in black zirconium oxide ceramic. Along with a tachymeter scale in Super-LumiNova, the outward design is also notable for the ALINGHI logo on the stop/start pusher, which has been created in red varnish. Ernesto Bertarelli says, "It's been an immense pleasure to collaborate so closely with OMEGA on this wonderful new timepiece. Throughout our history, we've been very aware of the watchmaker's incredible expertise in sports timekeeping and passion for sailing. So, it is a very special moment to have worked on a watch together and now see the exquisite results. It's the perfect start to our relationship and a real sign of more to come in the future." To find out more about the Speedmaster ALINGHI, click here. Inquiring about The Swiss Connection, click here! #Speedmaster   #OMEGA   #GoAlinghiGo Photo credits ©Loris Von Siebenthal / ©OMEGA 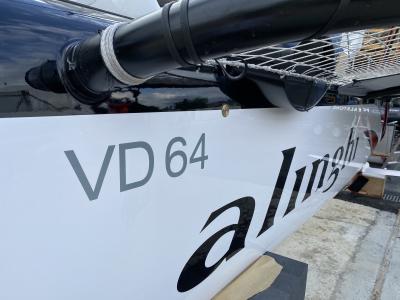 Following the recent guidance from the Conseil Fédéral and the new directives from Swiss Sailing, the resumption of training on Lake Geneva is now possible, in compliance with health rules. These last months have defied us all and we will continue to face these challenges together in the coming times so that a restart is favourable across all aspects. On our side, we are delighted to be able to return to our sport and our passion again, and do so with a feeling of great gratitude to all the people who have worked and are still working to manage and lessen the effects of this pandemic. Pierre-Yves Jorand, team director: “Our 2020 season will partly resume with the launch of our TF35, and partly be postponed, since we have decided, in agreement with our partners, OMEGA and PELLE P, not to participate in the GC32 Racing Tour this year. “Later in the year, we will re-examine the return of our GC32 to competition from 2021, hoping to defend our titles in the World Championship and the annual Racing Tour. Indeed, with the GC32 class having decided to postpone the majority of the planned programme (only two independent events will be offered at the end of August and in mid-October), these titles will not be in play this year." Regarding the TF35, the Alinghi team is hard at work to finalise the preparation of its brand-new boat, picking-up where it left off in early March. To learn more about the TF35, click here. Nils Frei, team member and coach: “We are happy to be able to resume our activities on the water and as a team. We are eager to proceed with the very first launch of our foiler and to get started sailing. A good list of tests in all conditions awaits us in order to continue the development of our boat on Lake Geneva. As with the launch of any technological racing machine, we will proceed in stages and wait until we have validated the boat completely before going out in a sustained way. “Even if, to date, no regatta is planned and trips outside Switzerland are suspended for this season, our motivation remains very real and I can say with some certainty that all of us are impatient to return to the water." We look forward to sharing with you over on our social media channels the foiling sessions of our new machine (registered "SUI 100 / VD64") and in the meantime hope that you can continue to take great care of yourself and your loved ones. 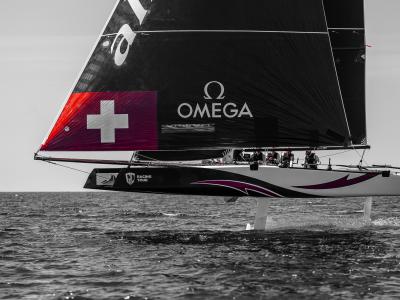 Due to the current health situation, the organising committee of the GC32 Racing Tour has cancelled the opening round of the 2020 championship. The competition would have been held in Muscat, Oman from March 26 to 29. The team had planned to be there from March 17 and, as such, no member of Alinghi is currently there. The second stage of the GC32 Racing Tour is scheduled for Riva del Garda (Italy) from May 28 to 31. To date, no decision has been made and an assessment of its feasibility to go ahead will be made in due course. Regarding the TF35 Trophy, the second circuit on which Alinghi is competing in 2020, the team is hard at work preparing its new boat, the delivery of which it took early March in Switzerland. In terms of its schedule, the team has been first working on the assembly of the boat and its fittings, wiring the electronics, preparing the automated flight system and more (for those who want to find out more, please see our social media feeds). The rules for this new foiling class allow a possible first launch on April 1st for the eight teams entered on the circuit. The championship should start with a regatta organized by the Société Nautique de Genève from May 21 to 24. Health and safety above all, the programme will be adapted accordingly.

25 years after its first multi-hull took to the lake, Alinghi is launching its 2019 sporting season on Lake Geneva. Meet us at the Société Nautique de Genève from May 3rd to May 5th for the first of the seven events of the final D35 Trophy, in which seven teams will take part. Pierre-Yves Jorand, Team director : "The D35 fleet has reduced in size for this last championship, but to see the diligence of the boats in pre-season training, I think that the battle on the water will be intense and that each race will be hard-fought. Nothing more is needed to motivate the team less than a week from our first race!"   It is the final D35 Trophy because, after 16 years of good and loyal service, the Décision 35 will, at the end of the season, pass the torch to the brand new TF35. This 35-foot catamaran equipped with "T" foils (hence its name) will become, from 2020, the backbone of the one-design championship that has run from 2004 to 2019 with the D35. Before this transition, the teams will, together, be focused upon testing, developing and debugging the very first TF35, which is currently under construction and which should pull its first edges on Lake Geneva this summer. This is how Alinghi will use its free time between each event in 2019, participating actively in the development of this new racing machine. Ernesto Bertarelli, helmsman and skipper: "We are nine shareholders associated in the creation of the TF35 and each brings their own skills to the development of the boat and to the launch of the class. Our team has been contributing to this project since the start. The emphasis this time is on the development of the flight assistance system that will make the boat more accessible to teams with fewer hours of navigation in three dimensions." Thus, the season comprises the D35, the development of the TF35, but also the GC32 programme, with five events on the GC32 Racing Tour, including the World Championship series at the end of June in Lagos (Portugal). Arnaud Psarofaghis, co-helm and co-skipper: "This year, we are joining the circuit on which we made our foiling debut in 2015. We are familiar with the boat, but we will have to adapt quickly to new race areas, longer race formats that in the Extreme Sailing Series, as well as to our competitors. The first time we will line-up against them will be at the end of May in Villasimius (Sardinia)." The boats have been prepared with care, the circuits are defined, the objectives of victory are laid. The team is the only missing piece of the jigsaw... After a number of successful appearances in recent years, Bryan Mettraux officially joins the core, permanent team, an appointment that meets the requirements of a packed annual calendar, the specifications of foil racing and, as ever, the team's commitment to young Swiss sailing talents. With two titles to defend this year in D35 and GC32 and the ambition to go get a World Title in the GC32... Lights! Camera! Action! The team is ready to 'roll' around the buoys. ABOUT The Team Sailors Ernesto Bertarelli (SUI) - Helmsman and skipper - D35 & GC32 Arnaud Psarofaghis (SUI) - Co-helm and co-skipper (GC32) and mainsail trimmer (D35) Nicolas Charbonnier (FRA) - Tactician - D35 & GC32 Bryan Mettraux (SUI) - Headsail trimmer - D35 & GC32 Timothé Lapauw (FRA) - Floater and foil trimmer - GC32 Coraline Jonet (FRA) - Floater - D35 Yves Detrey (SUI) - Bowman - D35 & GC32 Nils Frei (SUI) - Coach and spare crew - D35 & GC32 Technical team João Cabeçadas (POR) David Nikles (SUI) Claudy Dewarrat (SUI) Team director Pierre-Yves Jorand (SUI) Club Société nautique de Genève 2019 sporting calendar Find the dates for each event by clicking here. To find out more d35trophy.com / gc32racingtour.com / gc32worlds.com 16th D35 Trophy useful infos GC32 Racing Tour useful infos   #GoAlinghiGo #D35Trophy #gc32racingtour #gc32 Credit for photos © Loris von Siebenthal & Lloyd Images